Did you know dogs & bears are closely related? 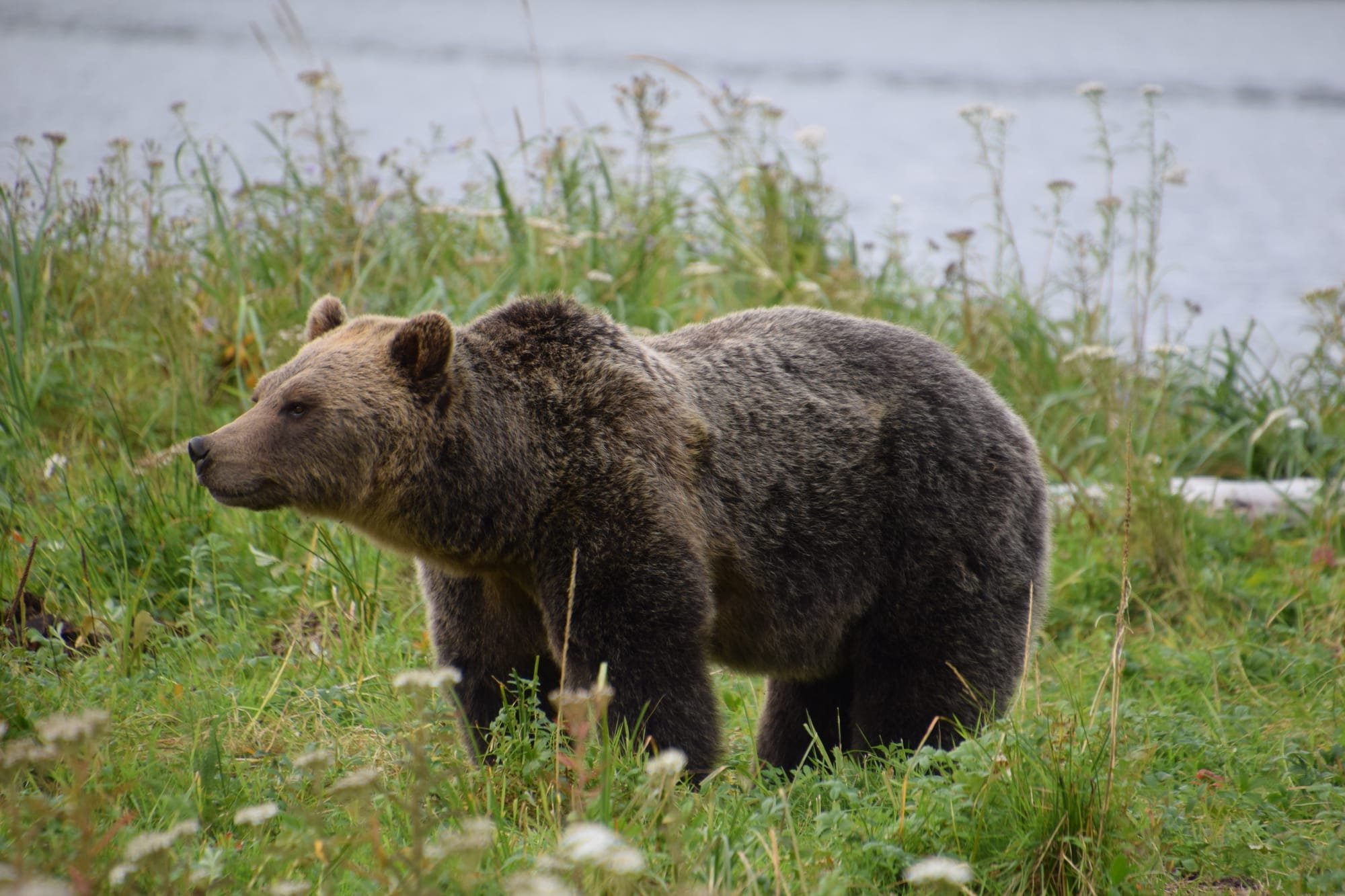 I didn't until a couple of weeks ago.

In September 2019 had the great privilege of spending some time in the Canadian Northern Rainforest in British Columbia with some very knowledgeable guides to observe grizzly bears and also seals, sea lions (also close relatives), bald eagles, ospreys, wolves (which we unfortunately didn't catch sight of) in a totally natural environment. All my observations were taken from a boat and the bears had the whole forest to disappear into if and when they wanted but they chose to carry on doing their thing knowing we posed no threat to them.

Dogs, bears & sea lions are related as they are all mammals which are part of the Carnivora (Carnivore) families which means they all share a simple dental configuration with large canine teeth which you can see below. Don't worry, this is the only biological reference I am going to use.

The relationships between some of the bears I watched has been confirmed by non contact identification such as remote cameras and gentle fur capture devices which can identify the physical attributes of the bear with DNA collected off the fur. None of the bears have ever been captured, anaesthetised or had tracking devices fitted, all the research is done in a non invasive manner. The relationships I describe below were identified by the above means. This info is not only used for identification but to plot distances covered and the breeding practices of both males and females.

Below are two examples of how the bears reacted and behaved in very similar ways to dogs. I have photos of the chain of events of both encounters and we heard vocals too on the first but on the second we were further away from the bank so were unable to hear any vocals.

We were watching three female grizzlies on the river bank who we were told were related from the research mentioned above 2 sisters and an auntie on the river bank in an area of approx 100 metres squared. We were anchored approx 20m from the nearest bear who was the sister of one and auntie of the other.

Initially all 3 bears were approx 100m apart and avidly digging up and eating roots of their favourite plant (which showed they are omnivores, like dogs and humans and eat both meat, fish and plant based foods) and were pretty much oblivious of our presence.

Bear 1 spent most of the time we watched in the same area, bear 3 kept her distance at the back of the bank and bear 2 gradually approached bear 1

When bear 2 reached bear 1 they initially kept their distance and carried on digging for roots until bear 2 got too close, when the body language of bear 1 changed. You can see in the second picture below bear 1's ears have changed position  (not pointed forward as in the pictures above) just like  a dog's do when another gets too close and they are uncomfortable with it and  the hair on her back of her neck appeared (this isn't very clear on these photos) more prominent like a dog's hackles. When bear 2 didn't pay any attention bear 1 first made low verbal noises and when bear 2 didn't move respond she then growled loudly and bear 2 quite quickly moved away.

It is known that bears as with dogs will only fight as a last resort as a fight will more than likely result in death or severe injury to one or both animals and there are no vets in the rainforest.

On the second morning we came across two grizzlies on the side of the estuary once the guide took us close enough he identified them as a mother and her cub, a young adult who was probably born in the spring of 2018 so is approximately 18 months old. When we arrived they were both digging roots as the ones from the evening before were doing. Roots would not be their food of choice at this time of year as they are trying to put on weight for semi hibernation over the winter, but the salmon which would be their food of choice were running late going up river to their breeding site this year. This feeding carried on for about 20 minutes until something appeared to spook Mum

Mum once she has listened and looked around went back to her cub and led him/her away from that spot and moved along the bank to make space between the potential threat and her and her cub just like dogs would do if they are free to do so (e.g. off lead).

While the above was happening we heard a noise of movement in the trees behind where the bears were mum & cub were initially and then......

These are all very typical behaviours of a male dog when encountering a strange dog or a new scent they haven't smelt before. Once he has done this......

The male decides there is nothing for him so heads back to the forest, once mum is sure he has gone she returns to the original place, checks it out has a pee and then once she know it is safe calls the cub to her and they carry on eating.

This is a very similar scenario to one that would happen if it were 3 dogs, there was plenty of sniffing and scenting but no aggression as the Mum made sure her and her cub were at a a safe distance and able to flee into the forest if required.The male checked there was no competition for him and the female wasn't in season there so left them at peace. If either of the adults had felt threatened there would have been noise a posturing just like dogs but as previously said a fight would only have ensued if the mum feared for her cub's safety or the male felt threatened by another male and as they were both able to escape if required this was never an issue.

Therefore if we give our dogs the space they need and an escape route even on lead a similar scenario will play out.

I loved my time with the bears and I hope to go back one day to do some further research on the similarities of behaviour.